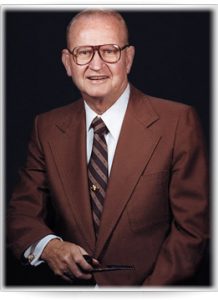 Roy Weatherby has left an indelible mark on the gun industry. His story began in earnest following his first deer hunt in 1942, which resulted in a wounded buck that left him both frustrated and convinced he could find a more effective way to take an animal.

From that day, Roy embarked on changing the way the world viewed ballistic performance, championing the use of lighter weight bullets at ultra high velocities with maximum energy…the foundation for what would later become known as the Weatherby Magnum.

In 1945, Roy made the monumental decision to move from wildcatter to a full-fledged business. Borrowing $5,000 from the Bank of America, he started Weatherby, Inc. and would soon begin building/modifying his own “Weatherby” rifles to accommodate his proprietary cartridges. All the while, the popularity of the Weatherby name —and his magnum cartridge performance—continued to grow.

In 1958, Roy would again change the landscape of the industry when he introduced his own bolt action design, the legendary Mark V®. Billed as the “world’s strongest bolt action,” the Mark V features three rings of steel surrounding the cartridge case head, nine locking lugs (as compared to the traditional two) and a very short 54-degree bolt lift. With the Mark V, Roy had a rifle action that was ideally suited to the power and strength of his cartridges…a shooting “system” that had no equal.

In addition to the performance aspect of his rifles, Roy also developed a “look” that was distinct as well. Originally known as “the Hollywood Rifle” his stocks featured a unique raised comb Monte Carlo design with beautiful embellishments of high gloss walnut stocks. Rosewood end caps with maplewood spacers, inlays, fancy checkering and other custom touches became part of the Weatherby signature style. Accordingly, the rifles became very popular among the rich and the famous, including the likes of Roy Rogers, John Wayne, the Shah of Iran, and other foreign dignitaries.

Throughout the years, the Weatherby mystique would continue to grow just as his business grew. Later in the mid-1960s, he would add a line of Over/Under shotguns called Orion® and Athena®, and Patrician pump and Centurion semi-automatics in 1972. In 1971 he introduced the Vanguard® rifle, a scaled down version of the Mark V designed to accommodate standard rifle calibers such as the .270 Winchester or the .30-06. In each case, the firearms carried the distinctive style and quality that had become synonymous with the Weatherby name.

Roy Weatherby died in 1988, nearly 45 years after he began his simple quest to find a more effective way to take an animal. Across those four decades, he forever changed the way we look at and judge firearm performance. As the Weatherby slogan states still today, “Nothing shoots flatter, hits harder or is more accurate than a Weatherby.”